Outdoor Afros Swim in Open Water for a Good Cause

That’s right! In an historic event this weekend, the East Oakland Swim Club in partnership with Water World Swim Organization Swim and the Centurions of San Francisco, hosted 100 Black Folk and Friends Alcatraz to San Francisco Swim. Folks from around the Oakland Bay Area came together to swim in the surrounding open waters for this good cause: to encourage more black and brown folks to learn to swim, and demonstrate that many already do!

Courtesy of The Grio

Unfortunately, 70 percent of black children do not know how to swim, and the consequence is a disproportionate rate of drownings in our community. According to the University of Memphis study, the fatal drowning rate of African-American children ages 1-14 is 2.6 times higher than that of white children in the same age range.

Group  leader Cedric Troupe shares, “[Oakland] has shutdown many of its public pools, limiting access to swimming in our communities. I hope that through this swim, we raise awareness about how important swimming is to black folk, and the importance of public pools.”
Outdoor Afro Leader Zoe Polk, an expert swimmer in her own right, started out the morning with the group and some Clif Bar Mojo!

“It was a beautiful morning,” she said, “I was so happy to join Cedric and friends to swim for this important cause!”
Learn more about the East Oakland Swim Club by visiting their Facebook page.

Where the Black Anglers Are

Outdoor Afro just received a note from Arthur Bronson, President of the International Federation of Black Bass Anglers (IFBBA) to let us know what his organization has been frying up these days. The IFBBA’s members are comprised primarily of people of color and its membership and outreach spans the globe. The organization also targets and mentors urban kids of color to participate in various fishing derbies and clinics.

Mr. Bronson says that fishing for African Americans is not new, “we have always fished for food first and recreation second. Our families came out of the South where we fished the river, creeks, and lakes for crappie, bass, and catfish.”

He is so right. And for those of us who don’t fish regularly now, most have memories. I recall catching my first crappy at age three in Clear Lake, California, along side my southern Daddy. As legend has it, once I had the fish on my line, I exclaimed, “Look daddy, the fish is laughing!”
Kudos to the IFBBA for doing its part to make fishing a more visible tradition and to create more memories — and delicious fish frys for a new generation!

Please click their logo up top to learn more!

I took a climbing trip with Outward Bound in my early 20’s, and it changed my life. It was a physical accomplishment I did not think I was capable of achieving – and my awareness of possibility and faith from that successful experience remains with me today.
Chelsea Griffie was similarly inspired by rock climbing and the outdoors. Her Chicago parents were not campers, so she climbed for the first time as a young adult on a trip to Brazil, and was hooked. In the years since, Chelsea’s skills grew through her participation and leadership in  NOLS, the National Outdoors Leadership School.
In additional to reaching her own climbing goals over the years in the Yosemite Valley, considered the climbing Mecca, Chelsea teaches backpacking skills and yoga to women of color through the Balanced Rock organization. She is also currently the Program Director of Bay Area Wilderness Training, an organization that offers basic leadership courses and advanced seminars to prepare adults to lead youth safely into the wilderness. Here is more about BAWT:

If you are interesting in learning to climb, Chelsea suggests taking a trip to your local climbing gym, where you can test out the sport before deciding if it’s right for you, or if you are up for more of a challenge, consider Outward Bound or NOLS courses. These rigorously rewarding courses are organized around nearly every age group and located all over the world. Try climbing at least once — it just might change your life!
Listen HERE to my talk with Chelsea, which follows an delightful interview with Audrey Peterman, organizer of the Breaking the Color Barrier in the Great American Outdoors Conference.
Photo by Dudley Edmondson 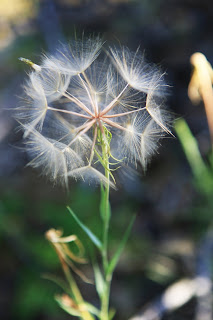 We just got back from 8 days of Northern California bliss with some of the most fun and fantastic Bay Area folks who all had the same vacation idea: Feather River Camp! 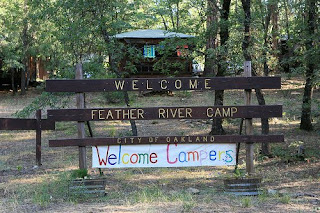 Each year, I meet up with the self titled “Stumpers”. We converge on the camp’s Folk Dance Week theme, and are notorious for our daily all-inclusive Happy Hour, around a big old stump that doubles as a lounge table. Evan and Willa, our resident bards, came up with a theme song some years back (“Here at Feather River!”) that celebrates the camp, our group, and the City of Oakland — and each year they add a new, clever verse that summarizes the peculiarities of each session. 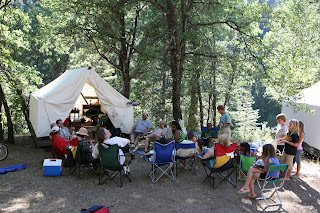 I have to admit, Folk Dance Week at Feather River took this Oakland girl some getting used to years ago, but once I realized all the dances were some form or another of the “Electric Slide” and when they added the “Cupid Shuffle” to the mix in 2007, I was hooked! 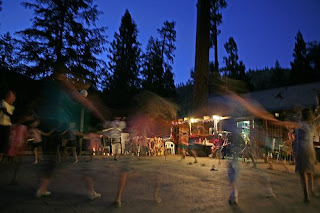 For the novice camper, this is your kind of place. You don’t have to bring a tent because you can choose from a sturdy canvas covered tent like this: 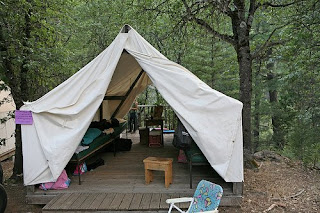 –or a wooden cabin with electricity!

I attempted to pen down some highlights while I was at camp, but whenever I tried to sit down and write, I was either whisked away for the next dance or was too zoned out in a wilderness induced stupor. But there are some moments I’ll never forget:
— Playing Disco B-I-N-G-O with my youngest. In our camp’s version, each time your number is called, you have to get up and do a 70’s jig, like “The Hustle” or “The Bump“!
Look at mama work it! 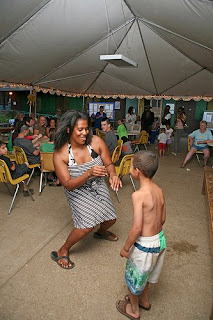 –Meeting new families; learning and laughing about how much we had in common with one another 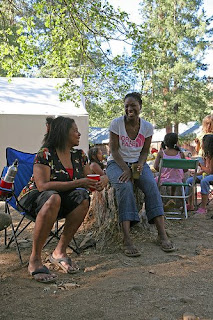 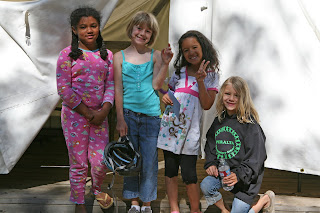 — Tubing with my 7 year-old daughter down a gentle river, surrounded by austere forests on a gorgeous Sunday afternoon 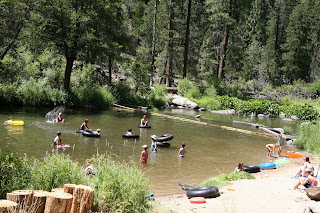 — Having a late night heart-to-heart chat with my 12-year old by lamplight — and he was actually listening!
It has taken me a few days to get on track with the Bay Area schedule, but I am still basking in the rewards of our time away that was a gift that keeps promoting peace, connectedness, and love for my family and community through nature. 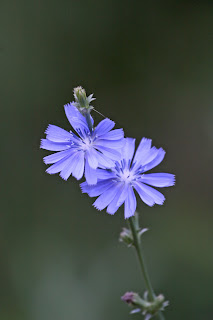 How did an Oakland girl like me come to love getting her camp on anyway? Pt. 3 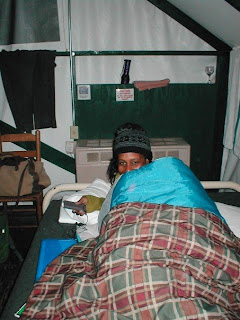 After getting married and starting a family of my own, camping took on a new meaning. For just a short drive and little money, I found camping was one of the most economical ways my new family could take a vacation. During these years I collected essential camping gear, like our first family-sized tent and propane stove from local garage sales and eBay — my family still uses these items today.
But as my family grew, so did the effort of camping. Thus the city of Oakland’s Feather River family camp, situated about two- hundred miles north, became a very attractive option for us. For about $75 per day back then, our family could camp at their beautiful developed site where: three delicious meals a day were prepared (and announced with the toll of a bell), a kind nurse dispensed an endless supply of band-aids, platform tents and cots were already set up, and a refreshingly cool swimming hole was observed by attentive lifeguards. Another bonus of family camp, were the many fun, organized activities and special relationships we developed with the other Oakland families we joined each summer.
Now my children (ages 12, 7, and 6) love the outdoors and every February they begin humming camp songs around the house and double check with me to make sure we are registered for the upcoming summer season!
Aside from our annual Family Camp, we also venture out on local hikes or family bike rides at least monthly. My eldest son is a Boy Scout and he is now developing outdoor skills and going on camping trips with his peers just as I did at his age. I recognize that the fun my kids have now in the natural world is the foundation for a love and engagement with nature that lasts a lifetime and is likely to be shared with their own children.
I still do enjoy tent camping sometimes, but I find that as I approach the big Four-O, I more frequently choose to balance comfort with my outdoor fun — nights of sleeping on just a tarp under the stars have passed me by. I now fantasize often about a future of creeping along the highways in a well-equipped RV, enjoying each state of the Americas, one campground at a time.
Catch-up!: Part 1, Part 2

A Seattle Times article from 2005 explores why blacks are not camping in this Pacific Northwest region with 250, 000 acres of parkland.
“One former ranger, who worked at Deception Pass and other state parks that each hosted up to 400,000 visitors a year, reported seeing fewer than 50 blacks over a 10-year period“