Bicycling in the Bay Area 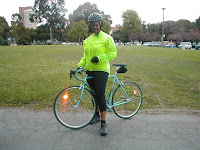 I live in the San Francisco Bay Area where the weather is a reliable average of 65 degrees year-round and there are trails and paths with sweeping views just minutes away from wherever you live.

If you are thinking about riding a real bike in the Bay Area, instead of a stationary bike at the gym, try riding with the Oakland Yellow Jackets. Their first ride of the season is this Saturday! The first ride is traditionally a completely flat 10-mile ride that starts at Lake Merritt, goes to Alameda then heads back to The Lake where a potluck awaits! You can also join the club for only $30 for the year for guided rides that are planned at least once per week.

I love the Yellow Jackets because you don’t need an expensive bike and fancy gear to ride with them. They also organize group rides based on ability and stamina, so you can ride an easy flat ride if you’re a beginner or take on a more challenging ride if you’re a stud.

2 Thoughts on “Bicycling in the Bay Area”